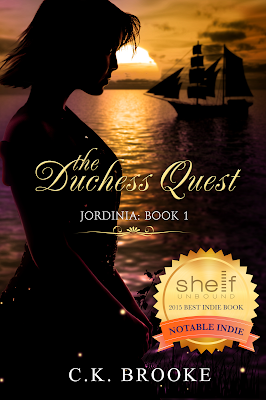 Dainy doesn't know that she is the lost Duchess of Jordinia, believed to have been assassinated fifteen years ago. Nor does she know that her uncle has implemented an illegal contest to seek her, offering her marriage hand as the reward! Though at odds, three clashing rivals - including a noble giant, a forest dweller and a thieving rake - voyage together by woodland, prairie and sea to recover the lost royal, notwithstanding the assassins and spies at their tail. Soon, young Dainy is swept into a comically complex romantic quadrangle as each suitor competes to capture her heart. Charmingly romantic and bursting with political intrigue, startling twists and vivid characters, readers of romance and fantasy alike will adore this original yet timeless tale of swashbuckling adventure and unlikely love. 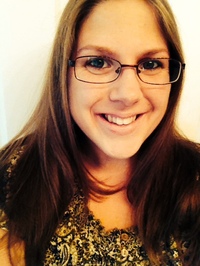 C.K. Brooke is a 2015 Shelf Unbound Notable Indie author with a five-star rating by Readers' Favorite. She holds numerous fantasy and romance publications with 48fourteen, Limitless Publishing, and Elphame Press. Her lifelong passion is books - reading, writing, editing, publishing and blogging about them. When not blissing out in literary land, she enjoys info-tainment podcasts, singing, songwriting and playing the piano. She lives in Washington, Michigan with her husband and young son. There's tons to check out at the new CKBrooke.com, so come and see what she's up to! Check out her V.I.P. Readers Club (Subscribers get a free eBook!)

Fifteen years ago, the Emperor and Empress, also known as Duke and Duchess, of Jordinia were usurped and executed with their children. Except that their daughter, Eludaine, escaped, though she was too young to remember her old life. Fifteen years later, after learning of her survival, her uncle issued a challenge that any man who can find the Duchess Eludaine and bring her back will win her hand in marriage as well as fifty pounds of gold. But the new rulers of Jordinia will stop at nothing to kill her and her seekers.

The Duchess Quest by C. K. Brooke was a lovely romance full of danger and adventure. Two men vie for the duchess’s hand while assassins hunt the companions down. Plus, there are more than a few secrets hiding in the pasts of the protagonists and antagonists alike. The characters may not be as good (or bad) as they seemed at the beginning.

Though dozens of men join the quest, three men join together to rescue the Duchess. There is Mac, the sweet, young woodsman; Bos, the kind giant motivated by duty to his former Emperor; and Jon, the charming thief with the sketchy background. Which one will she fall for? Are first impressions trustworthy? Then there is Eludaine, or Dainy, as she would rather be called. Such a sweet, beautiful, innocent girl oblivious to her heritage and the contest for her hand.

What do I say about this book? It was definitely a fast read. The romance had plenty of ups and downs as well as the danger of the assassins trailing them. There were a number of surprises I had not anticipated, though a few of the plot twists I had already guessed due to the foreshadowing. The ending was a little different than I had imagined. It did not tie up all of the loose ends but left it open for a possible second book. I mean, Dainy is the rightful ruler to a kingdom that she did not conquer by the end of The Duchess Quest. Also, I wish there had been a wedding at the end. I understand that the couple is planning to get married, but it would have been nice to “see” the wedding. And, as a note, there was a rather romantic scene in there that went a little farther than I usually appreciate reading; a blackout would have been helpful, in my opinion.

I enjoyed reading this book and look forward to the second. I would recommend this book to those who enjoy medieval or fantasy romance. 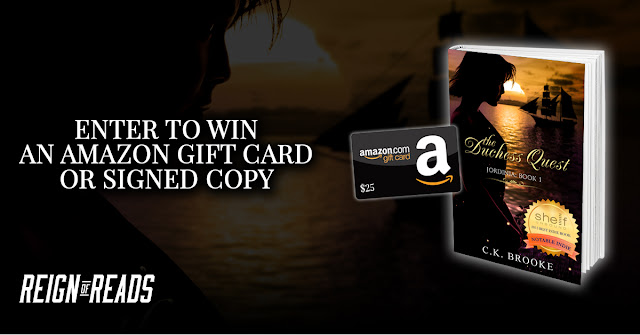 Blog Tour Organized by:
YA Bound Book Tours
Posted by Emily K at 4:00 AM