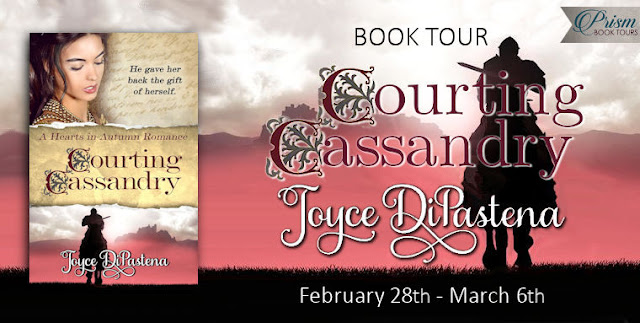 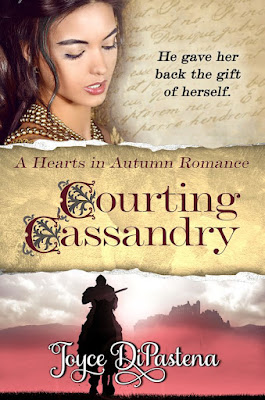 Is it too late for second chances when the girl you loved in your youth comes back into your life?

Gerolt de Warenne became guardian to a child-heiress named Cassandry when he was only nineteen-years old. As he watched her grow into a lovely young woman, he found himself falling in love with her, but Cassandry viewed him as an older brother. So, burying his feelings, he gave permission for her to marry another.

Twenty-four years later Gerolt and Cassandry meet again. With the loss of their respective spouses, Gerolt hopes to finally court Cassandry, but she desires to remain a widow. Instead, they agree to a betrothal of their children.

Matters become complicated as their friendship begins to evolve into the romance Gerolt has always wanted. But by the law of the medieval Church, Cassandry and Gerolt can’t marry if their children do. Can they find a way to be together? Or must they sacrifice their future for the love of their children?

"Courting Cassandry" is a “Hearts in Autumn” romance, medieval romances revolving around heroes and heroines “in the autumn of their years.” Because love isn’t only for the young!

The First Book in the Series

Sir Balduin de Soler gave up long ago on love. He never had the means to support a wife until an unexpected advancement in his fifties allows him to reassess his future just as the lovely Lucianna enters his life.

Lucianna Fabio harbors a secret, painful memory from her past that has kept her unwed, as well. Now in her forties, she thought herself too old to marry until she meets Sir Balduin. Now suddenly their lonely autumn lives feel very much like spring again . . . until Lucianna’s brother appears without warning and threatens to revive the secret that will destroy Lucianna’s second chance at love.

"Loving Lucianna" is the first in Joyce DiPastena’s new "Hearts in Autumn" romance series, medieval romances revolving around heroes and heroines “in the autumn of their years.” Because you’re never too old to fall in love!


Joyce DiPastena dreamed of green medieval forests while growing up in the dusty copper mining town of Kearny, Arizona. She filled her medieval hunger by reading the books of Thomas B. Costain (where she fell in love with King Henry II of England), and later by attending the University of Arizona where she graduated with a degree in history, specializing in the Middle Ages. The university was also where she completed her first full-length novel…set, of course, in medieval England. Later, her fascination with Henry II led her to expand her research horizons to the far reaches of his “Angevin Empire” in France, which became the setting of her first published novel, Loyalty’s Web (a 2007 Whitney Award Finalist).

When she’s not writing, Joyce loves to read, play the piano, and spend time with her sister and friends. A highlight of her year is attending the annual Arizona Renaissance Festival .

Joyce is a multi-published, multi-award winning author who specializes in sweet medieval romances heavily spiced with mystery and adventure. She lives with her two cats, Clio and Glinka Rimsky-Korsokov, in Mesa, Arizona.

Chess was a hugely popular game among the nobility of Europe during the Middle Ages. The game is believed to have originated in India in the 6th century and made its way to Europe somewhere around the year 1000. The rules were somewhat different than the modern game and the names of some of the pieces changed, translated into more familiar European concepts. (Examples: the minister or vizier became the queen; the elephant became the bishop.) Even the colors of the game pieces were different. Instead of the black and white pieces we use today, the most common choice of colors in the Middle Ages were black and red.

The medieval nobility were drawn to the game of chess because it was a game of mental skill that had the trappings of warfare, an activity in which much of the nobility of Europe was frequently engaged. The game board itself came to reflect medieval society:

The pawns represented the serfs who plowed the fields, the politically weakest people in the realm. There were more of them than the lords they served (hence there are more of them on the game board), but their moves are limited, as their freedom was, and they are considered easily expendable.

The castles, or rooks, represented the fortresses in which medieval lords lived.

The knight was represented by the horse, which in war was a symbol of knighthood. Knights rode into war on horseback, while everyone else (like archers) remained on foot. This game piece’s unique pattern of jumping about the board represents the knight’s agility.

Religion played a dominant role in the life of every person in the Middle Ages, so it was natural for the church to be represented in the game. This piece became known as the bishop. In addition to their spiritual duties, many medieval bishops ruled over large areas of land, wielded political power, and sometimes actively fought in wars, as during the Crusades.

The only female game piece on the board is the queen. While technically considered the “weaker sex” during the Middle Ages, some queens nevertheless accumulated great power. Some served as regents for their husband the king while he was away fighting wars, with the ability to rule in the king’s behalf during his absence.

Finally, of course, comes the king himself. He is the tallest piece on the chessboard, and also the most important, which is why the strategy employed by all the other pieces is designed to protect the king at all costs. Once the king is trapped by the other team, it is checkmate and the game is over. The term “checkmate”, by the way, comes from the Persian words shah mat, which literally means, “the king is finished.”


$20 See's Candies Gift Certificate (if US) or $20 PayPal Cash (if international)
Copies of Loving Lucianna and Courting Cassandry (signed print if US, ebook if international)
Ends March 12th

On Tour with Prism Book Tours
Posted by Emily K at 4:30 AM