Review Tour: The Last of the Firedrakes 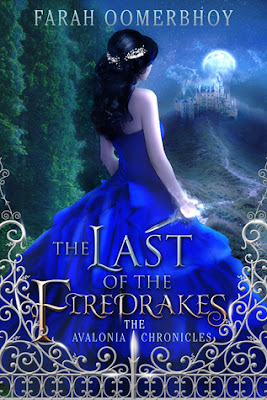 16-year-old Aurora Darlington is an orphan. Mistreated by her adopted family and bullied at school, she dreams of running away and being free. But when she is kidnapped and dragged through a portal into a magical world, suddenly her old life doesn’t seem so bad.

Avalonia is a dangerous land ruled by powerful mages and a cruel, selfish queen who will do anything to control all seven kingdoms—including killing anyone who stands in her way. Thrust headlong into this new, magical world, Aurora’s arrival sets plans in motion that threaten to destroy all she holds dear.

With the help of a young fae, a magical pegasus, and a handsome mage, Aurora journeys across Avalonia to learn the truth about her past and unleash the power within herself. Kingdoms collide as a complicated web of political intrigue and ancient magic lead Aurora to unravel a shocking secret that will change her life forever.

The Last of the Firedrakes, by Farah Oomerbhoy, was not quite what I expected.  At first, it seemed somewhat cliche.  The princess, thought dead, was found and has to fight to reclaim the throne, or the masked hero rescuing maidens and helping the poor.  As I continued to read, however, I found the book to be quite interesting.  The characters and the story pulled me in, making me long for the next book's publication.  There is a reason, after all, that some themes are overused.

The world the book is set in was fascinating.  There were fantastic creatures and several different kinds of people, many of whom inherit one kind of magical power or another.  I enjoyed the diversity of the settings within the world, too: from quaint fairy village to a magical university, from a medieval castles to eighteenth century-styled palaces.  I can hardly imagine the beauty.

I also enjoyed the characters.  Aurora struggled to find her place and accept her identity in the new world just as much as she struggled to control her substantial powers.  The bit of forbidden love involved only helped so much, since she could never have the man she grew to love.  Which brings me to another of the main characters.  This particular young man heroically clung to a deathbed promise spoken out of love, something that I think all readers will still wish he would break, no matter how upright it seems.

The plot, as I have mentioned, could have been done a little better, in my opinion.  But I still think the book is well worth the time spent on it.  I look forward to the sequels and conclusion of this series, after all, the end left much to be discovered and resolved.

I received a free copy of this book in exchange for an honest review.
Posted by Emily K at 2:40 AM