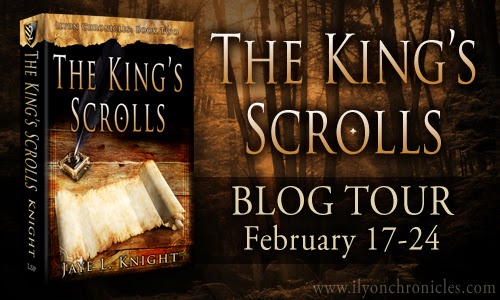 Today, I am excited to be hosting The King's Scrolls Blog Tour. Jaye L Knight has graciously  answered several questions for an interview and has provided me with a copy of her featured book, The King's Scrolls, to review. In addition, Jaye is having an awesome giveaway I am sure you will all enjoy. 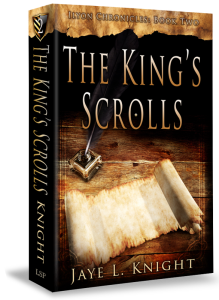 Following the harrowing events that brought them to Landale Forest, Jace and Kyrin have settled comfortably into their new lives and the mission of protecting those under the emperor’s persecution. The fast approach of winter brings with it the anticipation of a quiet few months ahead. That is until the arrival of four mysterious, dragon-riding cretes who seek aid in a mission of great importance—not only to their own people, but to all followers of Elôm.


Hidden in the vast mining valley north of Valcré, a faithful crete has spent years sharing his knowledge with the destitute miners and their families and is known to possess what may be Arcacia’s last surviving copies of the King’s Scrolls—the Word of Elôm. Joining the cretes, those in Landale must find the crete teacher and bring him to safety, but it is a race against time. Should Daican’s men find him first, execution and the destruction of the Scrolls is certain.


When disaster strikes, all seems lost. Could Elôm have a plan even in the enemy’s triumph? 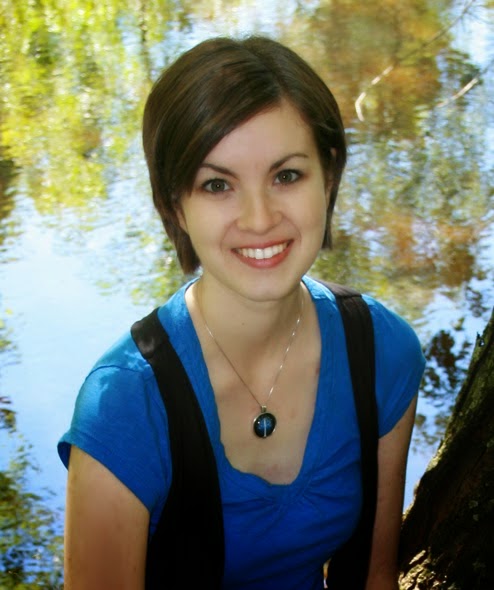 Welcome to Zerina Blossom's Books! We look forward to this interview.
Why did you feel you had to tell this story?


Well, Ilyon Chronicles is one of those stories that kind of showed up out of nowhere and demanded to be written. It didn’t really give me much choice. ;) But I think the reason I felt so strongly about it is it came during a really difficult time in my life. It was sort of a way to work through that. Also I feel very strongly about the themes in this story—themes of God loving you even when you don’t think you could possibly deserve it, of not treating people differently or badly just because they’re not like you, and of sticking to your faith even through persecution.


Those themes are very evident, which is what I love most about your books.
What was your favorite chapter (or part) to write and why?


In The King’s Scrolls, I think my favorite part to write was with Kyrin’s brothers. They have a much bigger role in TKS than they did in Resistance, and I loved working with their sibling relationships. Anything with interesting sibling dynamics is always fun for me.


Family relationships are always interesting.
Is there any particular author or book that influenced you in any way either growing up or as an adult?


The Lord of the Rings had a huge influence on me as a teenager and even now. I’m not sure I would be writing fantasy right now if not for discovering LOTR. It was just after reading it that I first decided I wanted to be a true author.


Awesome!
Our study of memory in one of my classes made my think of Kyrin's abilities. What inspired you to give Kyrin photographic and autobiographic memory? What kind of research did you do?


That development in Kyrin’s character is one of my favorite memories of first starting Ilyon Chronicles. Originally, she was just going to be very observant. Then, shortly after I started writing it, I was watching TV with my mom and saw a commercial for the TV show, Unforgettable, which is about a detective with a perfect memory. I consider it a God moment, having that commercial catch my attention and inspire a critical detail about Kyrin. As for research, I looked up some people who had this ability and read their stories. I also ended up watching the first episode of Unforgettable, and that gave me a good starting point for Kyrin’s abilities.


I’ve gotten my share of bad reviews on some of my earlier books. It always stings for a bit. The worst was probably my first one star review on Resistance. It’s not actually the worst review I’ve ever received, but just the fact that it was Resistance made it a bit harder since I’ve poured everything I am as a writer into this series. But that’s a writer’s life. I’m not sure I could pick only one compliment as the best because I’ve gotten so many wonderful reviews and sweet emails from readers that have been a huge encouragement, but I always especially love it when someone who doesn’t usually like fantasy tells me how much they enjoy my books. That always brings a huge grin to my face.
We always love those good reviews!
Thank you, Jaye, for the thoughtful answers to my questions. It has been a pleasure.

The King’s Scrolls picks up Kyrin, Jace, and Kaden’s story not long after Resistance ended. Their company along with the emperor have discovered the existence of a man writing letters about The King’s Scrolls, the holy books of Elom. After joining forces with several cretes and receiving dragons from the cretes for their help, the group sets off to find this man and the last known, complete copy of The King’s Scrolls before the emperor does.
After loving Resistance, I found that The King’s Scrolls was just as fantastic. Characters were added and relationships were deepened between the characters and their God. Each of them grew spiritually as well as in maturity. I love these books because Jaye has created a fun, adventurous story that is balanced with deep struggle and growth in the characters that influences me to do likewise.
A major part of The King’s Scrolls was focused on family relationships. The estrangement of Kyrin and Kaden from their country, and therefore family, certainly took its toll on all of them. The spiritual beliefs formed a barrier between them and their mother, brothers, and grandfather. It was interesting to see who became followers of Elom and who chose their own desires over family and faith.
A large portion of the book was spent in grief and sadness over lost loved ones. The majority of the characters lost someone. They each grew as a result of their losses, but they were devastated nonetheless. The deep growth that resulted from the grief and struggle was well worth the effort of reading it. All seemed lost, but hope won in the end. As a side note, I did not find the period of the characters’ grief boring, but those who love only the action might.
The book introduced another awesome addition—Dragons! Did I mention that I love them? Well, dragons are a large part of the King’s Scrolls. While they may not be sentient creatures, they still present awesome additions to the cast of characters.
The plot was intriguing with its dramatic ups and downs. Things never went as planned for the characters, but that is what made the story great.
In conclusion, Jaye has written another amazing book, with deep topics as well as an intriguing story. I eagerly look forward to book three.
I have received a free copy of this book in exchange for an honest review.

Share in the excitement of the release and enter to win a themed Epic Winter giveaway! Prize pack includes an autographed copy of The King’s Scrolls, a CD by Future World Music (some of Jaye’s favorite writing music), a dragon bookmark, a stone hawk pendant (much like the ones mentioned in the book), and a few packages of Twining’s Winter Spice tea to sip while you read! (Giveaway is open to US residents only. Cannot be shipped internationally.) 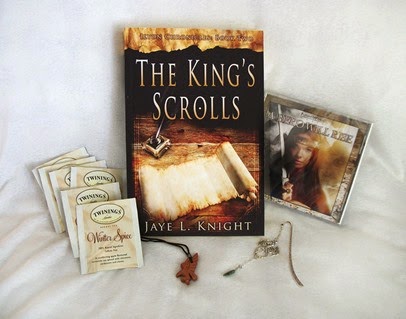