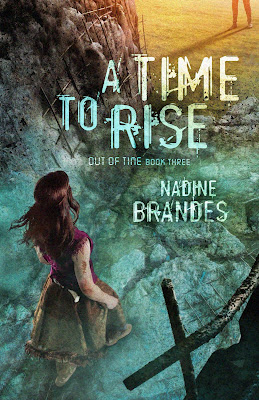 What more can you sacrifice than your life?Parvin Blackwater is dead.At least…that’s what the Council—and the world—thinks. But her sacrifice tore down part of the Wall long enough to stir up hope and rebellion in the people. Now she will rise again. Strong, free, and fearless.Parvin and Solomon must uncover the mysterious clues that Jude left behind in order to destroy the projected Wall once and for all. Meanwhile, the Council schemes to new levels of technology in its attempts to keep the people contained. Can a one-handed Radical and a scarred ex-Enforcer really bring shalom to the world?

Parvin is not dead. Everyone thought she was, but now she has risen! And she is determined to follow God's calling to Arise and bring Shalom to the people by tearing down the Wall and getting rid of the clocks for good. Parvin and her friends put a hole in the Wall, but the Council is planning to fix and stop anyone from going through. And then there is the problem of the clocks that the Council is trying to solve - some people die before their time while others outlive it.

Aaah! This book is so good! I loved A Time to Die and A Time to Speak, and A Time to Rise is the perfect conclusion to everything. Parvin, Solomon, Willow, Elm, and so many other favorite characters as well as new ones came together and changed the world through God's leading. They brought Shalom and freedom to the people, as I knew they would.

There are so many beautiful things in this book! First are all the spiritual aspects. The allegorical scenes at the beginning were fantastic and give a glimpse of what it would have been like to be Jesus' disciple during his death, burial, and resurrection. Second is Parvin's calling to Arise - Arise from the problems of this world, Arise from the fear and discouragement, Arise to follow God. Third are the times the characters, especially Parvin, gave unconditional love and forgiveness even to their enemies. It was beautiful and inspiring, especially considering how much Parvin has changed over the series.

The settings and the storyworld were pretty amazing, as usual. That one international trip the characters took showed one of the author's passions - I'm sure she wishes she had a language cap herself! The countries they visited were beautifully described. A new set of futuristic inventions were introduced, both the good and the bad, and all interesting and relatively believable. I do wish we had some of those now; they would make life so much easier.

What else? The dialogue and narration was great. I love Parvin's snarkiness; it brings me joy. And the continuing romance with Solomon was so sweet. The glimpses into other people's struggles and their journeys brought some depth and seriousness to the story. Parvin wasn't the only one growing, and definitely not the only one making mistakes. The author really doesn't mind injuring her characters, either. And those plot twists got me, badly. There's nothing like an unpredictable book!

Basically, I love this book. It's perfect conclusion to an amazing series. I hope this one actually Wins the Christy Award this year, not just places in the finals, because it deserves it. I recommend it to everyone . . . especially you young folks who like a good, faith-inspired dystopian.

I received a free copy of this book from the author in exchange for an honest review, and I definitely mean every word of it!