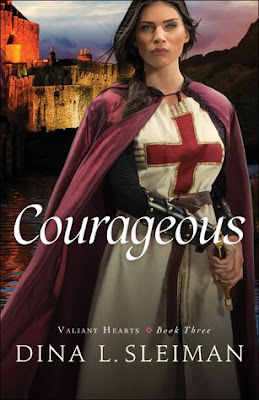 Inspired by the vision of the Young Lady Sapphira, Rosalind of Ipsworth joins a group of men, women, and children as a defender of the cross, seeking to free captives from prisons near Tripoli. She gladly gives herself to the cause, as she's haunted by a tragic mistake and no longer deserves such joys as marriage and family might bring.

Sir Randel Penigree was reared to serve in the church, but dreams of protecting the innocent as a knight. Joining a crusade to escape humiliation at home, he finds himself drawn to Rosalind as they partner to train and protect a group of young adolescents. When they face political machinations, danger, and an unknown enemy bent on their destruction, they are forced to reconsider their priorities and the very nature of the God they serve.

Haunted by their past mistakes and hoping to make penance, Rosalind and Randel join a group of men, women, and children on a crusade to the Holy Lands. While on the ship, Rosalind and Randel find themselves partnering to train and care for the small group of children on the crusade. Their friendship grows ever closer, and Randel and Rosalind soon agree to pretend to court each other to discourage the other single adults on the journey. But the dangers of falling in love are nothing compared to what awaits them in the Holy Land.

Courageous is the third book in the Valiant Hearts Series by Dina Sleiman. Though some of the characters are the same as in previous books, it is largely a standalone featuring a new journey, setting, and romance. And did I mention women and children warriors? The setting takes the characters to the Holy Land in the Middle East, and it is fraught with war, political stress, and religious differences as it continues to be in the present. Sometimes, there is no way to know who is really on your side.

The themes were the most memorable parts of this story. One major theme was guilt and its effects. Both the main characters were wracked with guilt over the things they had done, but they refused to forgive themselves of it or seek God for forgiveness. And since they both had guilt, they could better understand and help each other through it. Another theme worth mentioning centered on religious differences. There is some controversy over whether the crusades should have ever been fought, since today’s society teaches religious tolerance and since some of the wars were so needlessly brutal. Courageous touches on these topics and creates an acceptable compromise through the characters actions; they learned to work with the Muslims and respect and befriend them even in their differences.

Courageous was a fascinating adventure with memorable characters and epic plot twists! I recommend it to readers of YA historical fiction.

I received a free copy of this book in exchange for an honest review.
Posted by Emily K at 3:30 AM