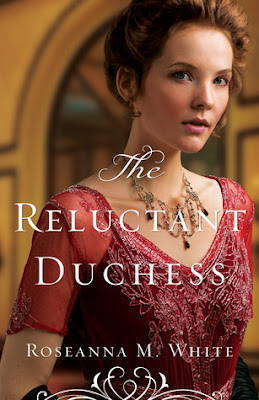 Lady Rowena Kinnaird may be the heiress to a Highland earldom, but she has never felt good enough—not for her father, not for the man she thought she’d marry, not for God. But after a shocking attack, she’s willing to be forever an outcast if it means escaping Loch Morar and the men who have jeopardized her life.Brice Myerston, the Duke of Nottingham, has suddenly found himself in possession of a rare treasure his enemies are prepared to kill for. While Brice has never been one to shy away from manor-born ladies, the last thing he needs is the distraction of his neighbor, Lady Rowena, who finds herself in a desperate situation. But when the moody Earl of Lochabar tries to trap Brice into marrying Rowena, Brice finds he’s not as opposed to the idea as he expected to be.Rowena wanted to escape the Highlands, but she’s reluctant to resort to marrying a notorious flirt just to gain his English home. And when she learns that Brice is mixed up in some kind of questionable business with a stolen treasure, she ’fears she’s about to end up directly in the path of everything she was trying to avoid.

After a horrible attack by her beau, Rowena feels hopeless. Her father is pressing her to marry her attacker, and there seems to be no way to contradict his wishes. That is, until her father and cousin concoct a plan to marry Rowena to a visiting duke. It is Rowena’s only hope to escape her suitor, but will she be fleeing into more danger?

The Reluctant Duchess by Roseanna M. White is beautiful! I enjoyed watching Rowena and Brice fall in love with each other. It took a lot of time and patience, especially because of the trauma and abuse Rowena had suffered and Brice’s secrets concerning the Fire Eyes. It was sweet and a little romantic with a bit of action twined in.

The story considered a number of interesting topics. Abuse, which is putting it mildly, was a dominant theme. Poor Rowena suffered so much, from both her father and her horrible suitor. It is a wonder she ever learned to trust Brice. Another topic was unwanted pregnancy. If Rowena became pregnant because of the attack, how would she and her new husband, who is not the father, treat the child? Would Brice kick Rowena and her babe out of his home? Or would they attempt to abort the child or leave the infant on the church doorstep? A third topic was supernatural things, namely, curses. It is a Christian story, and it asks whether curses are real and what a Christian’s reaction to them should be. The author addressed all of these topics and did a great job of weaving them into the story.

The one negative comment I have about the story is about the pace. Sometimes, I wanted to see parts of the story written out but they were skipped. For example, I would have liked to see Rowena meeting some of Brice’s family for the first time, which occurred not long after the wedding. But those days were skipped and summed up later. It was a little strange to see days and weeks at a time practically missing from the story.

In all, I really did enjoy The Reluctant Duchess and would recommend it to those who love sweet, historical romances, especially of the inspirational and Christian kind.

I received a free copy of this book from the publisher in exchange for an honest review.
Posted by Emily K at 5:30 AM