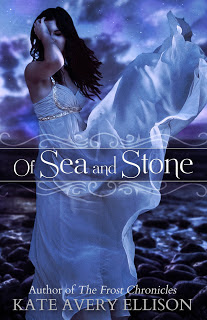 Of Sea and Stoneby Kate Avery EllisonRelease Date: February 2nd 2014Summary from Goodreads:All her life, clever Aemi has been a slave in the Village of the Rocks, a place where the sea and sky meet. She’s heard the stories about the fabled People of the Sea, a people who possess unimaginable technology who live below the waves in the dark, secret places of the ocean. But she never dreamed those stories were true.When a ship emerges from the ocean and men burn her village, Aemi is captured, and enslaved below the waves in Itlantis, a world filled with ancient cities of glass and metal, floating gardens, and wondrous devices that seem to work magic. To make matters worse, her village nemesis, the stuck-up mayor’s son Nol, was captured with her, and they are made servants in the same household beneath the sea.Desperate to be free, Aemi plots her escape, even going so far as to work with Nol. But the sea holds more secrets than she realizes, and escape might not be as simple as leaving....

I've been making up stories since I was five years old, and now I'm thrilled to be able to do it as a full-time job. I have an obsession with dark fantasy, dystopian futures, and Pride and Prejudice-style love stories full of witty banter and sizzling, unspoken feelings. When I'm not writing, I'm creating digital art, reading funny blogs, or watching my favorite shows (which include TVD and BSG). I live with my geeky husband and our two bad cats in Atlanta, GA.

Aemi’s life as a slave sucks.  Her only comforts are her friend Kit and her dreams of freeing herself and traveling to the mysterious and wonderful place her mother once called home.  But before Aemi has a chance to change her life, her village is raided by the sea people and she and many young men from the village are kidnapped and enslaved in the undersea world of Itlantis.  There, she finds that enemies might just be friends and there is an injustice that goes deeper than the one committed against her.

Of Sea and Stone was fantastic.  It grabbed and held on to my attention through the entire story, as Aemi experiences all the ups and downs of a slave in a technological, undersea world.  Her relationship with one of the other slaves from her hometown and the mystery underlying her capture and history kept me intrigued until the very end.

Aemi was a nice woman.  She always wanted to know more and used every opportunity to do so.  She usually had a decent attitude, despite everything that happened to her.  One thing I did not understand is why Aemi was determined to escape Itlantis, even when good things were happening to her.  Her life became much better than it ever had been in her village.  I suppose it is because of the injustice done to her—that she had no choice but was forced to go there.

I loved the world it was set in.  I had expected Itlantis to be a mermaid type of civilization, or maybe a version of the original Atlantians.  Instead, it was more like the modern-day civilization and technology, forced to go underwater because of some disaster a thousand years before.  The technology was slightly more advanced than it is today, instead of a primitive kind of society, like Aemi’s Village of the Rocks.

I found it interesting that Itlantis had slavery.  If it was an advanced society from earth, what happened to reverse the no-slave policy?  I suppose they were not exactly slaves: Criminals were forced into indentured servitude until they can pay off the debt they gained from their crimes.  But still, not everyone was actually guilty…

Overall, Of Sea and Stone was very interesting.  There were different facets to the story that made it interesting as the mysteries were solved.  I am excited to read the next book and bought it after I finished this one.  I would definitely recommend it anyone who likes dystopian.

I received a free copy of this book in exchange for and honest review.
Posted by Emily K at 12:52 AM