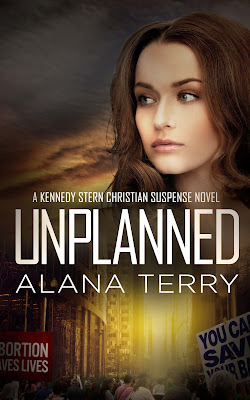 When Kennedy Stern’s childhood pastor asks her to volunteer at his new pregnancy center, she carves time out of her rigorous college schedule to promote the cause of the unborn.

After receiving a disturbing call from someone far too young to carry a child in the first place, Kennedy can no longer blindly hide behind the pro-life platitudes she grew up believing. She resolves to locate the unknown girl but winds up entrenched in a mystery that grows more convoluted as it unfolds.

Soon, Kennedy finds herself a pawn in a deadly game of intrigue, at the mercy of those who consider a few innocent lives a small ransom to pay in exchange for personal and political victory.

Alana Terry has won awards from Women of Faith, the Book Club Network, Grace Awards, Readers' Favorite, and more. Unplanned was a finalist in the Deep River Books writing contest.

After Kennedy signs up to answer phone calls from a pregnancy center, she finds herself talking to a very young pregnant girl. Kennedy determines to discover who this girl is in order to help her, but soon finds herself in danger because of her knowledge of the girl herself.

Unplanned was a whirlwind. I expected as much from Alana Terry, whose books have often brought me to stress or tears over the horrible situations the characters had to face. This one, however, also made a larger impact on my life because of its greater relevance to daily life in America.

In addition to the mystery and danger in Unplanned, Kennedy faces the controversy over abortion. Her beliefs are greatly challenged before she makes the decision for pro-life from her own knowledge and experience rather than her parents’. Making one’s own decision out of one’s own research was something the author stressed in the situation, something that is relevant to nearly everyone who reads this book.

One thing I noticed was that Alana Terry did a good job showing what a first year in college is like. Having recently experienced it myself, I can honestly say that Kennedy’s experiences were true to life, making her more relatable to the reader.

The plot focused more on the issue of abortion and helping the pregnant girl than on the suspense. It is not preachy, but it was definitely not as full of action, torture, escapes, and suspense as previous ones, such as Torn Asunder (whose characters were mentioned in Unplanned).

Unplanned was a great book I would recommend to others.

I received a free copy of Unplanned from the author in exchange for an honest review.