Before I introduce this new book, I would like to share my story regarding it. Recently, I have practically been bombarded with information about human trafficking. In one week in September, three email appeared in my inbox saying that I won three of Alana Terry's books in various formats. The books were from three separate giveaways I had entered three months before. When was the last time you won three books from three separate giveaways from the same author, dear reader? And when did that happen during the same week that your college decides to show a documentary (a really good one called Nefarious) and an informational meeting about human trafficking, a major topic in those three books? I am a little suspicious that God is trying to show me something, perhaps about the future plans He has for me. In fact, another set of "coincidences" regarding the same topic seems to be happening again, now.

In any case, upon Alana's request, I decided to review one of the books I won, called Slave Again. I began reading it with the expectation that I would witness the suffering of those trafficked women and children in a way that facts and statistics cannot--through the thoughts and feelings of a character in a well-written book. I was not disappointed. 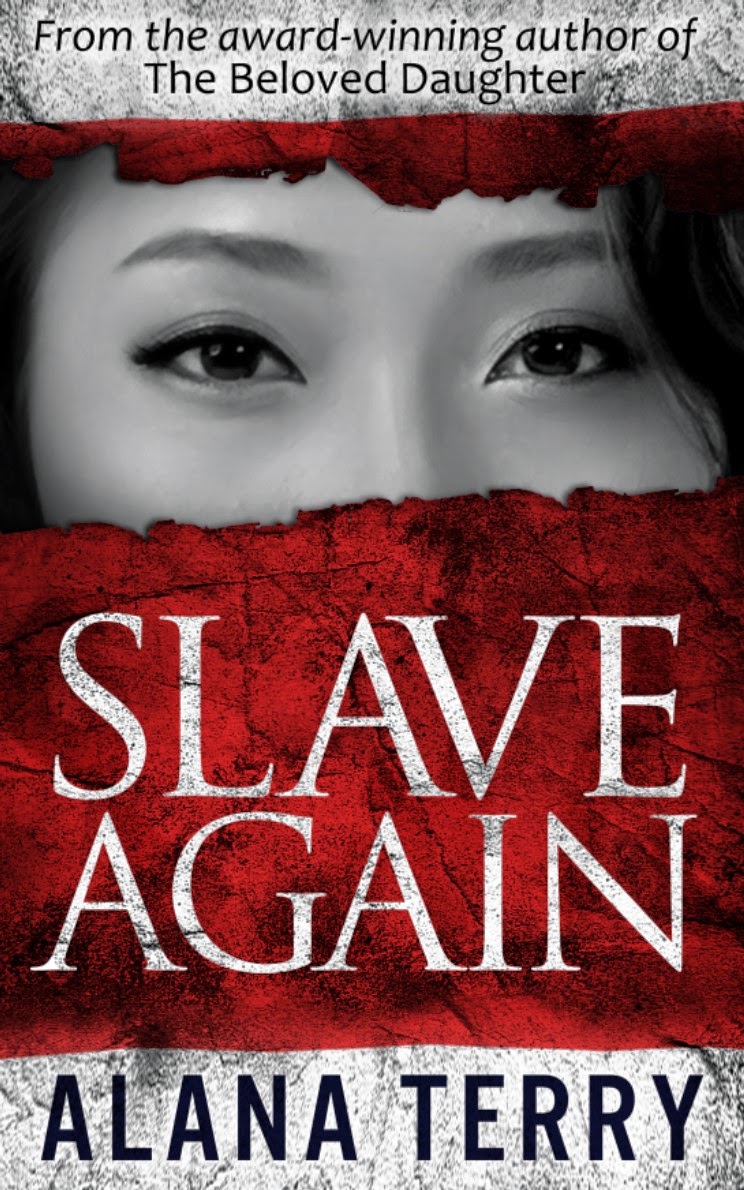 After escaping a North Korean prison camp, Mee-Kyong is hustled over the border and sold into the Chinese underworld. She vows to survive, but sheer determination and willpower won't save her this time. Is she fated to remain a slave forever?


Alana is passionate about human-rights issues in North Korea and has devoted her writing to raise both awareness and funds to help North Korean refugees find freedom and safety. You can find out more about Liberty in North Korea and Alana’s rescue campaign at alanaterry.com/link.


As you may have noticed, suspense is not my usual genre. However, I found that Slave Again was a wonderful book. I won’t attempt to write a long summary of the book this time because Alana did such a good job of it and I don’t want to reveal any more than I already have to in the review. Suffice it to say, human trafficking is a major theme in Slave Again, and the main character, Mee-Kyong and a few of the other characters are trapped and trying to escape from being trafficked in China and North Korea.


Slave Again kept me on my toes. Everything would be going fine or you thought you knew where the book was going, then BAM! something horrible or unexpected happened. I couldn’t even guess what would happen next. A little over halfway through the book, however, nerve-wracking occurrences calmed down a little bit. The characters were recovering and adjusting. There was a little suspense on account of the overheard phone calls between a government spy and his/her superiors. The ending was suspenseful, I was glad to note, but I won’t give it away.


The way Slave Again ended was more than satisfactory but disappointed me a little because there were so many loose ends. Several characters I had begun to care about were never heard from again within the book, and several instances. However, I assume that many of those loose ends will be taken care of in the next book, Torn Asunder, which is due to be released in December and which I will be reviewing and hosting the blog tour.


Alana Terry showed the characters’ faults in ways I do not usually think about. All the characters were selfish. Even the sweet missionary couple was portrayed as helping others partly only to get something from the situation; the husband helped Mee-Kyong in order to make his wife happy which in turn helped him be happy. This made me think deeply about whether my own motives about helping others are selfish. Also, the missionary woman was often mentioned as being naïve, which makes me wonder whether I too would be considered naïve in such a situation and whether I could still be effective as a missionary if I was naïve.


Slave Again helped open my eyes to the realities of human trafficking, particularly sex trafficking. The women and children who are trafficked suffer more than anyone should. I applaud anyone who helps stop the practice and hope to join the fight myself. I am quite certain that Alana has information for anyone willing to help end human trafficking in the world if you ask her.


Because of the theme is human trafficking, the characters are desperate, and the genre suspense, the book was only relatively clean. Slave Again included non-gory, violent scenes and a few implied sex scenes.


Overall, I applaud Alana Terry for a well-written, informative, and suspense-filled novel.


a Rafflecopter giveaway
Posted by Emily K at 5:56 PM