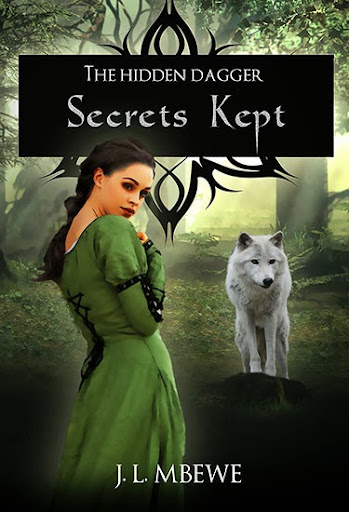 With a curse, she will build an army.
With the dagger, she will undo the last sacrifice.
But first the sorceress must find the secret keeper.

Torn from her homeland and thrust into a betrothal against her wishes, Ayianna learns her family has a deadly secret that now has her on the run. She joins forces with Kael, an embittered half-elf, and Saeed, an elderly High Guardian, to seek answers to her father’s death, the destruction of Dagmar, and the plains people’s bizarre behavior.

Ayianna discovers there is more at stake here than just her mother’s disappearance and her familial duty to her betrothed. The sorceress has cursed the plains people, and it is a race against time to release them before the sorceress resurrects an ancient evil.
Amazon
My Review
Show more
Show less
Secrets Kept, by J L Mbewe, is the fantasy story of a young woman, Ayianna, who discovers she's betrothed to a stranger and loses her family in one fell sweep. Then she is thrust together with three unlikely companions--a prince, an elf guard, and her betrothed--to flee for their lives, and then go on a quest.

I enjoyed this book very much, but it isn't the best I book I have ever read. Ayianna and her friends traveled all over their fantasy world called Nalu, encountering some things I found rather new to the fantasy world, such as childlike monsters that dissolve into dust when killed or an evil harpy lord who preys on virgin girls. I enjoyed the adventure of the novel and the secrets that nearly every character hides, and of course the lies they use to cover them up. There were also scores of unanswered questions hanging over their heads throughout the tale, and only some of them were answered in the end.

However, I found that there were too many unanswered questions. Every good book needs such questions to pull the reader in, but this one had questions that needed answers, such as what a word means exactly or how one race survived the massacre without its queen (the supposed only survivor) at least knowing something. I also thought there were too many gods to keep track of, and the Shadow God, who I believe was supposed to be Creator God, had so many different names that I couldn't keep him separate in my mind from the other gods.

Despite this, Secrets Kept was an intriguing book left begging for a second book!

Things you should know: There was a number of spells cast on the people by the sorceress and her minions. Monsters abounded. The sorceress was known for sexual immorality. There was also a graphic description of a massacre and numerous battles against evil. Also, the characters accidentally traveled into a hell/abyss sort of place that wasn't very well defined as to what exactly it was.